“Sufi music is a way of reaching out to the Almighty and Bollywood has definitely put its own twist on it.”

Presenting The Sufi Mashup, by Kiran Kamath which has the best that Sufiaana has to offer from My Name is Khan to Raanjhanaa. The soulfulness that shines through Sufi music is impossible to find elsewhere, so here is a Mashup that maintains the purity of the music and the memories associated with it. 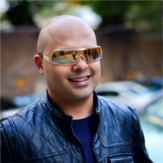